Day 12: Up at 5:30, break camp. Reba well rested. I walk to grocer and see they have a hitching post. Yeah, that’s right, a real hitching post! Just the day before, Becky had said she thought they had one on the side of the building, but Jason didn’t think so, and I too was skeptical. I return to camp, hitch Reba up, and depart at 7:45 am. We go to grocer, and Reba recognizes the hitching post (she's spent time in Amish country where there are many hitching post). After getting ice and groceries, we head south on Hwy spur 214, and rounding a bend to the west, we come up behind a trash truck. The truck is loading trash, with mechanical arms swinging up and down, and hydraulic rams hissing directly before us. Reba is afraid, but her calm nature comes though, and I coax her around the truck on the shoulder of the road. It’s one more experience for her on the road to becoming a “bullet proof horse”.

Next we must cross 75 Hwy, four lanes, busy with semi-trucks and cars – another first for us. I hold Reba back until the way is clear - and then: “Go Girl! Go!” Reba starts out strong, but just as suddenly tries to stop after seeing the transition where asphalt meets cement. Afraid of what she doesn’t know, she slides out onto the highway as if on ice skates, nearly falls, and then just stands there. Meanwhile, I’m looking at two semi-trucks and I hollering, “Go dang it! Go!” We make safely to the medium where we must wait again before crossing the southbound lanes, and things go smoother for us there. We continue west on gravel road 110 towards St Marys, but quickly run into a construction zone. A road crew in putting down “chip and seal,”and I cannot risk getting the fresh mixture in Reba’s shoes, so we turn south in search of another route. The heat wave of 2012 has begun, and we’ve hardly traveled 1 ½ miles south when Reba overheats (11am). I lead her ever so slowly up the driveway of a farmhouse, into shade where I get her water to drink, a little at time. No one is home, so I leave a note on the door telling what happened, adding that we have sought shelter under shade trees in the NE corner of their pasture. Reba recovers, and is soon grazing on rich green grass (grass that could not be mowed and bailed because it was located under the eve of a tree line). I make camp and await the landowner’s arrival. In the meantime, the landowner’s dog comes and makes himself at home in our camp. In fact, I sleep in the shade of the wagon, and he sleeps beside me. That evening, the landowner, whose name is Dale, gives me permission to stay on his land. We sit on his porch and have a good conversation, mainly about trucks and cars. Dale then gets paper and pen, and draws me a map that shows how to get to St Marys, including watering holes and other important information. Then with words of thanks and well wishes, I return to my camp. 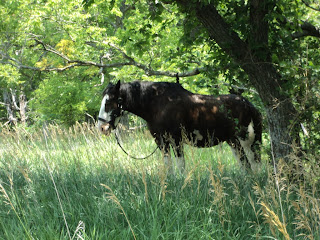 Reba, sleeping in the shade. 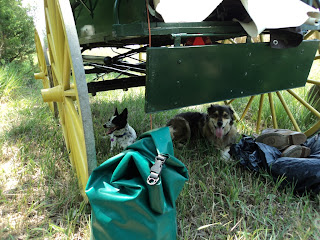 Jill and Landowners dog rest in shade of wagon.
Posted by James Sheldon at 5:39 PM