Day 30: Up at 4am, lots of chores. Reba is zonked, even snoring, and because I fed her up the night before, I know I can wait till the last to wake her. 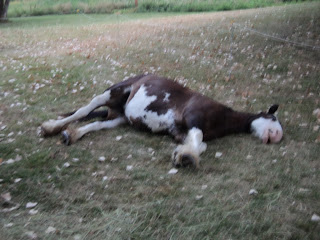 We get rolling at 7:20am, and as we leave town, a storm is rolling in. 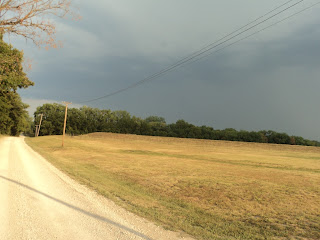 Looking behind us at storm (behind that treeline is Burlingame). 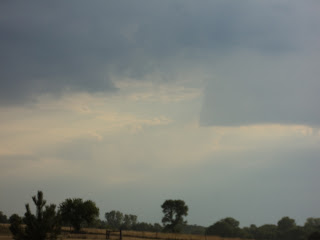 Odd cloud formation looks like a stablizer on a sailboat, just outside of Burlingame. 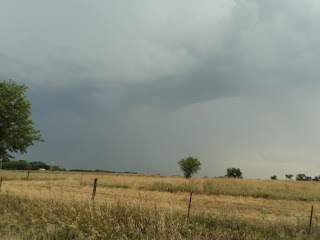 The cloud drops down lower yet. I decide it's time to trot Reba.
Gitty-up Girl! 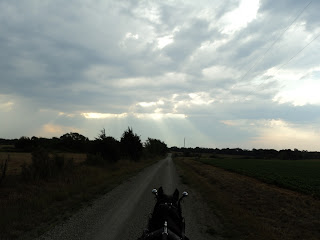 Directly ahead, the sky looks better. 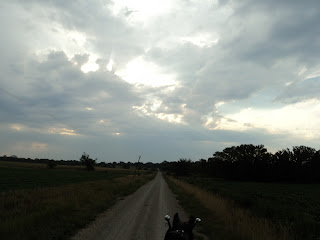 I thought we might stay ahead of the storm but it caught us and rained on us all morning. Meanwhile, I’m so cold, I get out and slog through mud just to stay warm. Reba is strong, and outside a few breaks for clover, grain, and water, we make good progress. Two miles from Lyndon, the rain stops and the sky begins to clear. It’s about 2pm, and we’re worn out. We’re going from farm to farm looking for a place to camp, but no one’s home. Instead of rolling into town in state of exhaustion and fierce hunger, I would rather go in the morning, with rest, a full stomach, and clean cloths. Nearly to town, I met a man named Jack, and he sets me up like a king. Reba gets a large pen (or small pasture), with a shed, water, and hay. I get a shady shelter house beside a pond, with running water, electricity, and a bathroom. 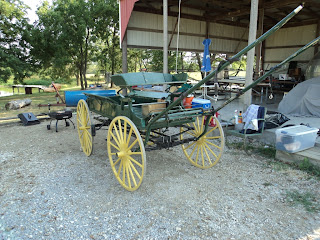 My camp at Jack's place.

While showing Reba around her new pen, Jack and I are speaking about antique cars and I’m not paying attention to the horses who have gathered at the fence to meet Reba. I darn-well know better, but I’m so tired, and the next thing I know, one of the other horses tries to kick Reba through the fence – Reba swings round to fire both rear cannons (huge steel clad hooves) and, in a split-second, I’m caught between. I cry out “REBA,”and thank the Lord she hears and sees that she’s scooped me up while whirling about to fire and… she stops! That, saves me. Unfortunately however, my momentum is such; I go flying sideways into the barbwire. I have cuts on my hand, forearm, and side, bleeding pretty good, but it’s not as bad as it looks. I don’t worry about it, but later, Jill thoroughly cleans the cuts on my hand and forearm (I wouldn’t know about the cuts on my side until a few days later).


After showing me around, Jack departs with well wishes and words of thanks. I’m so hungry I’m ill, but I know I should clean the mud off my wagon before it sets - and because Jack said to wet the ground if I built a fire, I unload and wash my wagon, then move it, and build a cook fire in the wet area. I cook a big thick steak, and man is it good! (I cook and bag a second steak for later). 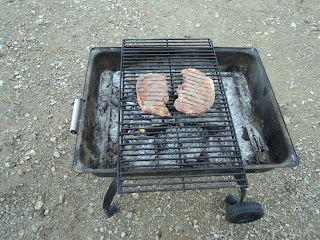 While I’m doing chores, a man named Frank, and his sister whose name I cannot recall, come to visit. Frank is an “old hand” with wagons and teams, and we make arrangements for me to stay on his land the following night, just a mile east of Lyndon (about 3 miles from our current location).


Finishing my chores, I hit the sack around 10pm.

TO CONTINUE TO NEWER POST, CLICK BELOW ON: "Older Posts"
(I know, it says "older posts" but it it acutally newer posts)
Posted by James Sheldon at 3:28 PM