Day 3: Up at 5:30am, breaking camp, cooked huge breakfast, do dishes, carry water by 5 gallong bucket from town to park three times for Reba (the first time she spilt the bucket). Carry groceries and 20 lbs of ice from grocer to park. Give rides to kids, take down horse pen, clean pen area, then do other chores, no time for lunch, hitch up Reba and set out, semi-truck, moment of truth, Reba stays solid. Exit town southward, backtracking to avoid highway, pick up Washington Road going north towards the town of Winchester. Time was approximately 1:30 and I was plenty hungry when a rancher saw me and came out to the road to met me. Very soon we realized that we were both good friends with an Amish horse trainer who lived in Missouri. We laughed about that and good conversation followed. The rancher's wife came out and asked if was hungry. When I replied that I was, she said that I was in luck. She then brought out two sloppy-joes, two pieces of corn-on-the-cob, and some homemade potato salad. The food was excellent! The rancher, whose name was Fred, brought out 5 gallons of water and a bale of fresh cut hay for my horse Reba. He refused to accept any money for the hay. After eating and more good conversation, I loaded the hay on the wagon and departed with many thanks and well wishes.

One big hill after another in the hot sun - climb to the top of one in hope of finding flat ground only to look down into another rugged Jefferson County valley – up and down, up and down. Reba has so much heart! If she stops on the way up a hill, I do not whip her and tell her to get going. I let her stop. It is in her blood to work, she wants to reach the top of the hill, so when she stops, it is only for ten or twenty seconds, in which one can see her gathering herself, catching her breath, then with a great heave, she starts pulling again, striving, driving with her powerful legs to get to the top. I finally told her that I was not going to make her to go up anotherhill. No matter what was in the valley below, we would stop there and find a place to camp. (My wagon looks like a light-made rig, but it is substanially modified to carry a heavy load, and it is heavy!) At the bottom of the hill I found a small dall that looked wild, but with lots of uncut grass - I pulled into it, tied Reba to a tree, and set out on foot to find the land owner, presumably in a farmhouse about 3 tens of a mile up the road. The land owner was quick to make me feel welcome. His name was Bill, and he said I could camp in the dall if I liked, but there may be a better campsite, and we got in his mule (mechanical mule) to have a look. We found a shady spot with lots of clover for Reba, and I set up camp there. Bill and his wife then came to my camp in their mule, and brought buckets of water for Reba, and dinner for me. The food was excellent, fresh caught fish from one of their ponds.

It is good to remember, the great hospitality I recieved was purely spontanious. Folks came forward in no small part (I believe) because the horse and wagon instantly tied us together with a cultural bond, as a symbol of our shared heritage, our story, something that bonds us - and of course, this is a journey of faith - so there you have it. 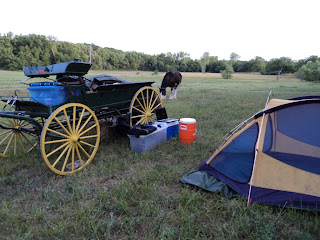 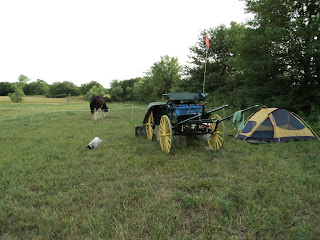