Day 40: Up at 5:30 (tired, didn’t want to get up). I’m polishing off my breakfast when Frank pulls up in his pickup truck and asks if he’s too late, adding that he brought bisques with sausage and gravy. He is too late, but not for having a good conversation, during which I ask him to excuse me for wearing the same cloths as yesterday (I ran out of clean laundry a few days back). Frank then asks if I would like to do my laundry at his place, and take a shower. I think it would be good on this morning for several reasons. One, because Reba is so tired, and I would like to let her sleep awhile longer. Two, because I’m on my way to the end of the trail, and I’d like to get there without looking like a man who crawled out from under a bridge. And three, because it would just feel good to get clean. Also, Frank, who owns a ranch serval miles away, has brought an excellent bale of hay made from brome, alfafa, and clover.


Frank has a ranch nearby, and we have only returned from it when Richard comes to my camp in his truck. Frank, Richard, and I have a good conversation, during which Richard asks if his granddaughter can come and interview me for the Ottawa Herald newspaper. After voicing my concerns about the press, I tell Frank that she can, and he relates my concerns to her over the phone. Frank’s granddaughter arrives shortly thereafter and interviews me. After the interview, I depart with words of thanks and well wishes. And straight away, driving up the steep grassy hill that leads to the road, Reba falters and we begin to go backwards. I immediately turn her enough to take the load off while almost simultaneously jumping off the wagon to get hold of her halter and comfort her (it’s amazing what 40 days of conditioning will do for a man, as I could not otherwise have responded so quickly). I realize that I have forgotten to take the brake off the wagon!

Reba is fine, and we proceed onto the road. But we haven’t gone 200 yards when Jill starts screaming bloody murder - she has been run over by the wagon! I fly off the wagon, and Reba knows somehow (by instinct or some other God-given gift) to stop and hold perfectly still. Meanwhile, I’m thinking the worst, but as it turns out, Jill is not hurt badly, no, not at all, and it’s a little miracle, especially when one considers how the wagon is heavy loaded, with narrow steel banded wheels like giant knives. 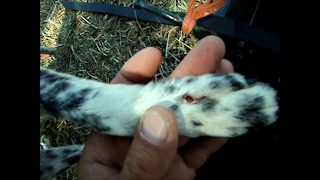 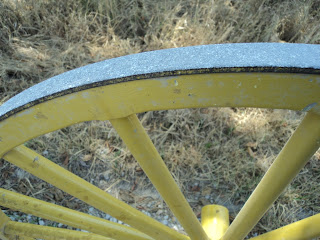 After checking Jill thoroughly, I take her up on the wagon and we proceed. We haven’t gone 300 yards total, it’s already past noon, and the day promises to be a cooker. Other than the heat, I do not expect much on this day. I know it will be a hard 4 mile to Osawatomie. Osawatomie is not a destination, but a point at which to end my journey if I have no marchers (it’s a much larger than the town I am addressing in my message, and knowing I will not be able to camp in their park, I plan to camp at a river access for fisherman).

Same as the day before, we avoid John Brown Highway by taking gravel roads. But I know we’ll have to return to the blacktop for the last two mile stretch into town – and in this heat - I’m not looking forward to it. By the time we reach the blacktop, we’re so wilted from heat, I wonder if we can make town. Turning onto the blacktop, we hardly get a hundred yards before we have to pull into a shade patch (located in the yard of a farmhouse, itself located or connected to a nursery or greenhouse store). We are sleeping in the shade when a woman named is Sandy asks if we need water. I thank Sandy for her kindness, and she and her mother tell me about an alternative to the blacktop which almost certainly saves the day (only a hundred yards ahead, the highway is intersected by an old railroad that has been converted to a bike and walking path that’s also approved for horse and wagon). Yeah, so we are able to get off the blacktop and onto a small shady path which takes us almost all the way to town. 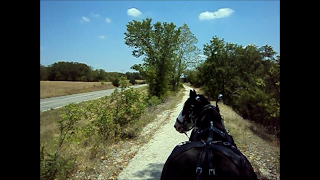 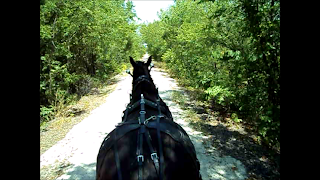 
Entering town, we go painfully slow, stopping in every shade patch. While resting in one shade spot, a group of three emergency vehicles comes almost straight at us, and Reba stays solid while they fly just feet away with lights flashing and sirens screaming (granted she’s tired and therefore calmer than usual, but still, what a bullet-proof horse!). 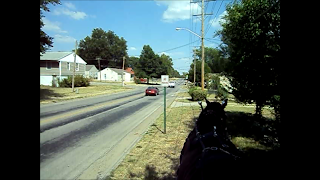 We continue, darn near dying in oven-like heat when somehow, Reba begins pulling with a will that could only come from God. Sure and steady, Reba pulls us to the “old creamery bridge” that crosses the Marais des Cygnes River.

To view video of bridge crossing, click link below: 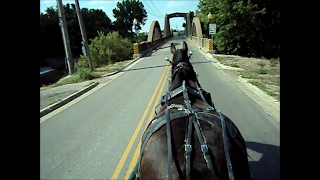 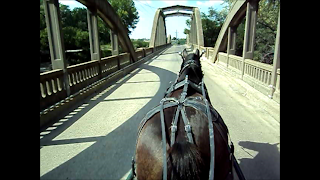 Reba's getting good at this bridge stuff. 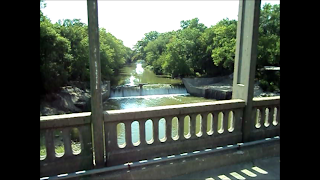 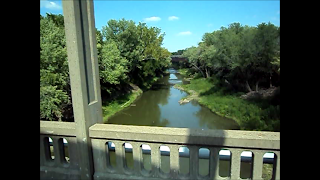 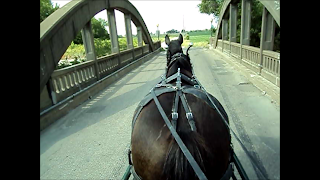 Across the bridge, we enter a fisherman’s access, and we’re done! Frank, who happened to be on his way back from a dental appointment, and has seen us in town, and knowing our plan to camp at the river access, arrives just ahead of us, greets us, and asks if I need anything. I confess to being terrible hungry, and Franks (kind of like an angel at the end of the trail) goes to get me a hamburger and onion rings. Frank also loans me his phone and I call my old friend Dale who will come with truck and trailer in the morning.

After Frank departs with well wishes and words of thanks, I put up my tent and Reba’s pen (I must first clean trash and broken glass from the ground). Its past 5 in the afternoon and a rough-looking group have trickled in to fish the river below. Fearing that someone might accidentally drive over my tent in the night, I use a bale of hay as a blockade. And as “luck” would have it, Frank had put the bale in a bright yellow plastic bag before giving it to me, so it really showed up well. 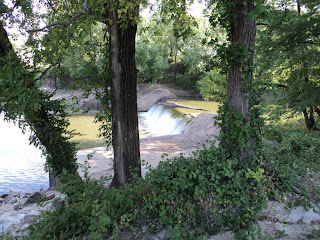 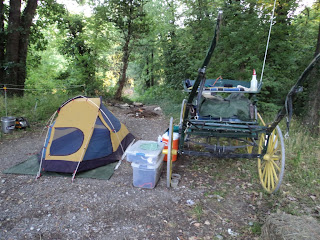 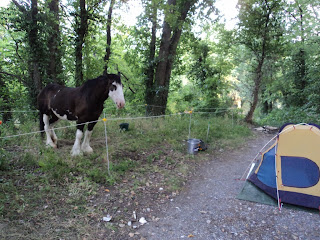 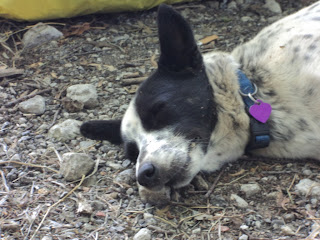 Bushed, Jill sleeps with her face on a rock.

I sleep well, and in the morning, my friend Dale comes with stock trailer. Dale and I load Reba and everything up. And that’s that, all praise be to God, who through ways unknown, brought folks forward like angels to help me along from beginning to end.

FAITH MARCH will begin again in 2013, to know more, and follow its progress,
please click this link: faithmarch.com

Posted by James Sheldon at 3:10 PM