Day 20: Depart at 1:15am by moonlight. But first, this is a place to tell, Reba and I are always a little nervous during the suit up process which involves putting on her harness and hitching her to the wagon. This is natural, and healthy, due to the element of danger, being a 1,700 pound animal that, being put in the unnatural situation of having an external-skeleton (the harness) put on from head to tail, could easily bolt, and a man who is not at once wary and in control, could get caught while hooking beast to heavy-loaded wagon, and go under steel-banded wheel like beefsteak under a knife…. but on this night, Reba is the calmest she’s ever been!

Lanny and another landowner have opened a path for me to go across prairie to reach the next interstate exchange to the west because it goes under I-70, whereas the interstate exchange here is an overpass, and could be very dangerous in horse and wagon. As a byproduct by their concern, I get to cross open prairie at night under a full moon at the foot of Mount Buffalo, and it is really something! I only wish I had a camera that worked at night (Mount Buffalo is the huge hill plainly visible from I-70 going west from Topeka Kansas). After crossing fields of bluestem prairie grass, we come out on a frontage road immediately north of I-70. We climb the south shoulder of Mount Buffalo, and proceed steeply down to the bottom where the road turns sharply to enter a small tunnel that goes under I-70. The tunnel opening faces north, away from the moon, meaning it’s in shadow, and looks like a big black hole. I get off to guide Reba only to I realize I’ve left my flashlight in the wagon seat, and I cannot go back for it because Reba is on the verge of panic. So I calm her, and guide her into the tunnel without a light, slowly, speaking softly, and she follows, and it is an experience to remember, with the traffic above, and the moonlight at the opening on the other end. After the tunnel, we proceed west on frontage road running south of I-70 to Vera Road where we turn south. 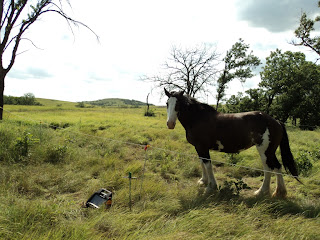 Reba at Lanny's with Mount Buffalo in the background. 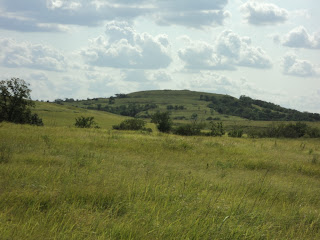 Area we crossed in moonlight under Mount Buffalo.

On Vera Road, we enter the famous Flint Hills, and it is a sight to see under the light of a full summer moon! We climb a tremendous hill for Kansas, and I help Reba by getting out, walking alongside, and holding the wagon by bracing myself against the wheel while she rests. Where Vera road turns west, I tie her and go for water from a pond, and give her grain and water before continuing (approx 4:00am). By 4:30, Reba is so tired, I stop to let her sleep (we had taken rest breaks, but not sleep) and I also sleep by laying down crossways in the wagon seat. Reba and I both fall deep asleep - day breaks - and we are still fast asleep when Jill wakes us because there’s a car that wants by but we’re in the middle of the road! So I pull over, the car comes alongside, and I have a brief but good conversation with Don. Don tells about a place to camp, a historic school house. I then continue to Skocomo Road where I turn south and proceed to arrive at the historic Skocomo school house at 7am.

Below is a little video I shot on Skocomo Road, at daybreak, while traveling towards schoolhouse:

The historic school house is perfect, with shade, excellent grass for Reba, and water from an old hand-pump well. I set-up Reba’s pen, then make camp and cook a big breakfast. A man named Dick stopped to say hello on his way to work. We have a brief but good conversation, and I tell him about faith march and give him my website card. As I said, it was a perfect campsite, but there was one little problem, flies, lots of them, all over all of us, and spray doesn’t seem to phase them. It’s hard to sleep with them crawling on my face - but I eventually fall asleep, and when I wake, Reba has a group of admires (see photos) and I am glad for it because it’s good for her to be around other horses. I type up a text on my phone to send to friends but lose it before I can send it. I type another text with flies all over my arms, and I try to send it, but there is no reception anyway (in these hills). I sleep, then get up and work on my computer journal while the memories are still fresh in my mind. I then spread out my bedroll and catch some shuteye. 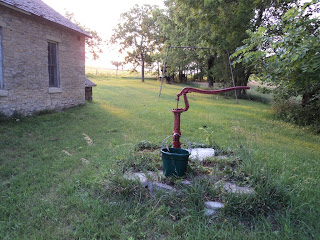 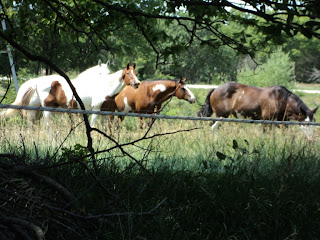 Around 6pm, a truck pulls in and I met Doug, Rod, and Ann. We have a good conversation, and I learn that Rod and Ann have a ranch where they raise draft horses. I also learn that Doug owns the horses that came to visit Reba. Dick then pulls in with his truck, and brings me some sweet corn. We all have a good conversation, in the course of which, someone notices the brake pads on my wagon are worn out. I say that I had started with a new set of pads, but wore them out riding the break down every hill (to help save Reba the stressful work of holding the wagon back). I say that I just realized how shot the pads were on the last bad hill, and I’m really concerned about it, but there’s nothing I can do until I can get to town and find some tools to make and install new pads. Doug then tells me he’s a carpenter, and can make some pads for me. Doug takes measurements then leaves only to returns shortly with brake pads and a tool box. He installs the new pads, and gives me several sets of spare pads he made at his home a short distance away. Doug, Dick, Rod, and Ann depart with thanks and well wishes. I fire up my stove and cook dinner, and am very glad for the corn that Dick brought. Now when Dick first brought it, I wasn’t sure I had room for it, but now I realize; I truly need this extra food for the night of work ahead, and this corn is just what the doctor ordered. Again, it’s about faith, and how God works through folks who come forward like angles out of the blue.

After dinner, I pack up camp for leaving later; I downsize Reba’s pen so it will be easy to take it down in the dark (moonlight). I lay Reba’s harness parts out for easy access in the dark. After preparing for departure, I lay down on my bedroll and sleep.
Posted by James Sheldon at 5:17 PM