Day 36: Woken by thunder, I jump out and put rain-fly on tent. As I do, the rain’s comes on and I must grab a towel to dry myself off before getting back in the tent – and boy are my feet muddy! Dawn comes and it’s still raining. Finally, at about 7am, it lets up, so I towel off tent so it dry while I’m making breakfast. No sooner have I gotten my breakfast gear out however, than it starts raining again, so I go back in the tent. After about 30 minutes, it appears the rain is done for the day. I make breakfast, then do traveling chores. We are off and rolling around 10am. And such is the heat and the dryness, the dirt field is so dry, one would never know it had rained! 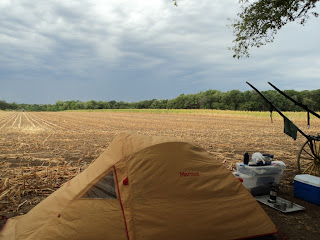 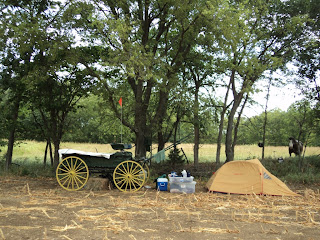 I thought it would be muddy, but I could hardly tell it rained. 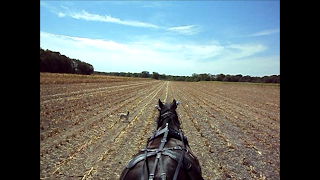 
To see video of getting underway, click on link below:


We talk to friendly folks along the way, get water with words of thanks and well wishes, rest in shade when we can find it, and proceed slowly until we reach the quick-shop beside Highway I-35 a mile from Williamsburg. At the quick shop I meet Angie’s friend Caroline who owned the land I stayed on last night - and when I thank her for a great campsite, she kindly replies that I’m most welcome. I get ice at the quick shop before continuing towards Williamsburg. Before getting to town, we stop to rest in the shade of the overpass. 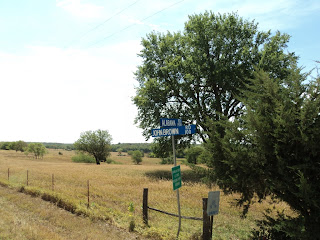 Intersection of John Brown and Alabama. 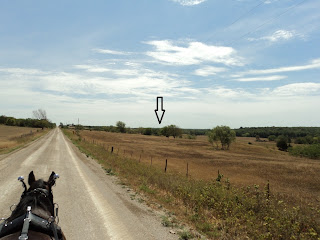 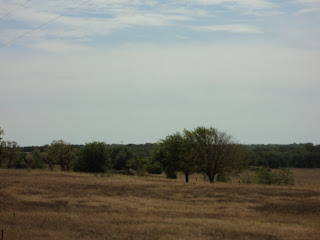 Zoom in on Williamsburg water tower. 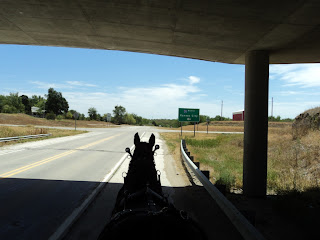 Resting in shade of overpass, just outside Williamsburg.

Resting in shade of overpass is a good video. Click on link below:
http://youtu.be/SaYCImAflwU

In Williamsburg, I follow the suggestion of several kind people and go to the city park. No sooner have I pulled into the park than I meet a young lady named Ashley. Ashley is from Topeka, and appears to be Hispanic or Native American and White, but in any case, she seems a beautiful young woman inside and out. I tell her what I’m about, and she invites me to eat across the street in the community center where folks have gathered in honor of her departed grandfather. I am so hungry! And once again, God has worked everything out to meet my need – I only have to keep putting one foot before the other with faith. Ashley did not seem fearful of what I was saying regarding the cultural issue, and I would have liked to speak with her more because the cultural issue is so difficult to talk about, and it's nice to meet someone from another culture who doesn't get uptight as soon as I start talking out helping "my people" survive. 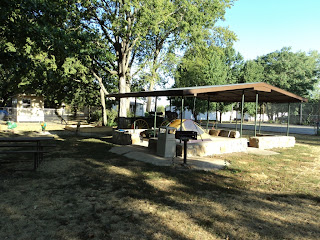 Camped in shelter house at Williamsburg City Park.
(Reba's pen is on the far side of shelter.) 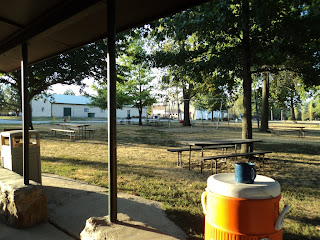 Looking from shelter-house-camp towards
downtown and community center.

After eating at the community center, I go to meet John the mayor. John is very young to be mayor, dividing his time between working as mayor, and working a full time day job to support himself. He is genuinely friendly, but takes it seriously as he should - another small town American doing his best to preserve and foster what so many of us hold near and dear.

Back in my camp, I meet Steven who tells me I can graze Reba in a lot he owns across the street, and I thank him for his kindness. Steven then departs with well wishes and words of thanks. I have two steaks to cook for dinner, but there’s no firewood because I’m not in the sticks, so I’m wishing I had some charcoal when along comes Brandon with his wife and little daughter - Brandon makes a phone call, and next thing I know, I have a bag of charcoal. Soon there are better than ten people in my camp, come to see the star (Reba), and that is okay by me - the kids get to pet Reba, and I get to tell the adults what I’m about. Kenny the [good-natured] grounds keeper also comes by. A teenager named McKayla brings me drinking water. John the mayor comes to check and see if there’s anything I need. And two young brothers named Chris and Cody are so enthusiastic about the idea of a man traveling by horse and wagon, they stay until after dark when I have to “throw them out.”It’s another good day, and I pray to never take it for granted. 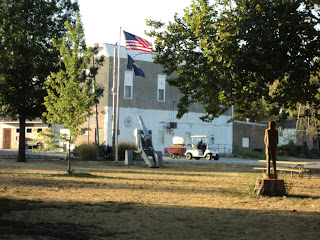 This is a view from my camp at the shelter house, in the
early morning. The man in the golfcart is Kenny,
watering the plants downtown.
Posted by James Sheldon at 3:18 PM