Day 4: Before heading out, I stop and thank Bill and his family. We talk about Faith March. Bill tells me the next fellow up the road is a retired Navy Seal, a survivalist, who was living off the land. Then with thanks and well wishes, I depart, heading north on Washington road. Soon enough, I met the retired Seal, a heavily bearded man named Denny - a diehard Christian - we hit it off from the start. Denny tells me to call him if I need anything, and sees me off with blessings.

Arriving in Winchester, I proceed to the city park and enter a building where a large group of people are gathered. Here I learn a good lesson: One should not enter a family reunion, knowing no one, load up a plate with food, and proclaim that if folks do not make a stand for what they believe, they will lose what's near and dear. Such an approach flies like a led zepplin. After a cool reception, I continue towards the town's conveniance store, but because hitching post are hard to come by these days; I tie my rig at the post office and walk to the conveniance store around the corner. Inside, I ask for the sheriff's phone number, but the sheriff didn’t know where I could camp, so I departed not knowing what to do. I was back at my wagon, worrying, and putting ice in my cooler when a man named Terry pulled up in a pickup truck. Terry said he had been in the conveniance store and overheard my convesation with the sheriff. Terry said he had a place for me to stay, an empty lot straight across from city park. So I got in my wagon and followed Terry in his truck (it was fun trotting Reba through town; "clipity-clop, clipity-clop," on quiet streets). Terry's empty lot was perfect for my needs; staight across from the park, with plenty of shade, and room for Reba. I am delighted, and thank Terry for his kindness.


I set up my camp, including a portable electric fince/pen for Reba. Denny shows up with a cast iron pot full of dinner for me; made from natural things that grow around here. It is good food! My new neighbors (in the house to the north) bring a water hose to the fence and tell me to fill up with water whenever I need. Terry comes to visit, as does Shirley, and we all sit in my camp and have a good time - everything from clean jokes to serious talk about the Lord. 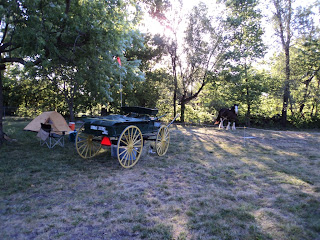