Day 26: Up at 3:30am (had planned on getting everything ready to go the evening before but did rides instead and have no regrets about it). It takes 3 hours to get everything ready to go, and we depart at 6:30. The heat wave has broken, and it’s a beautiful morning. We go west on 8 mile road. The clouds just do cover the sun like the edge of an umbrella (see photo), so we have cool shade even as we travel with blue sky before us - it stays that way all morning - and it’s great. 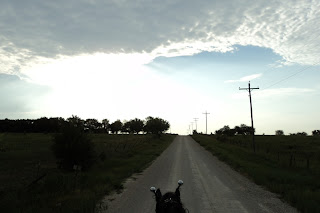 We turn south and, before too long, see the Harveyville water tower. 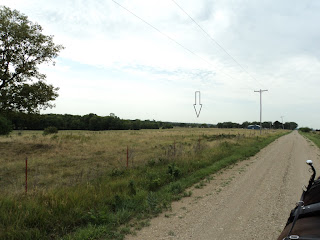 After turning south on Quaker Road and going about a mile, I stop and make breakfast. 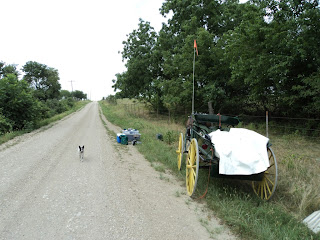 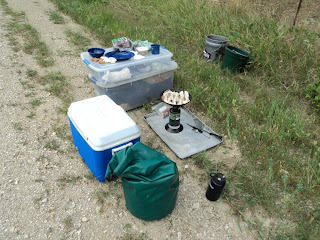 After breakfast, I continue south another mile or so until I met Diane who is taking out her trash. I ask Diane about the city park in Harveyville, and after some conversation, I decide to stay at Diane’s place where there's plenty of good grass, shade, water, and other horses to keep Reba company. (My plan is to go into Harveyville in the morning, make breakfast in the city park, and see what happens from there.) Dian goes off to work, and I set up my camp, then cook lunch: pork sausage fried with onions and green bell peppers, wrapped in flour tortillas, with hot sauce, and brownies for desert courtesy of the church folk in Eskridge. Next I lay my bedroll out in the shade of a giant oak tree, and sleep through the afternoon. Around 6pm or so, a man named Tom, his wife, and son-in-law Dean come to visit. (Dean appears to be Hispanic but that does not stop me from telling what I’m about, and as to be expected, the “cultural issue” causes some stress. As always, I make clear that I am not speaking against any other group of people. And I understand, there a few treatments more important to the human heart than fairness. I want fairness for my people. They have a right to keep their culture intact, and to say they do not is to say they do not have a right to peace, harmony, and happiness. As for my treatment of others, I have a history of it, and I would hope that those of other groups, who have known me, would step forward and speak on my behalf. 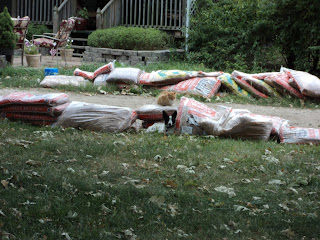 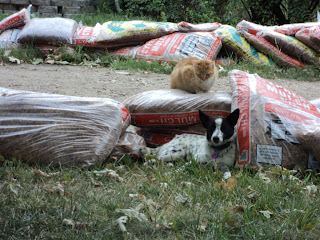 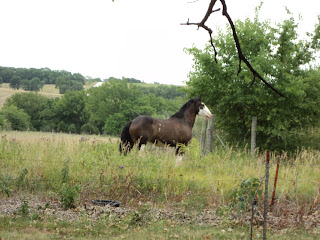 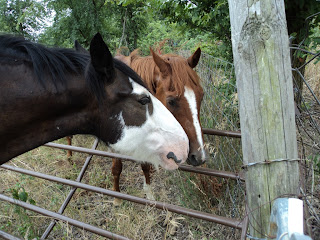 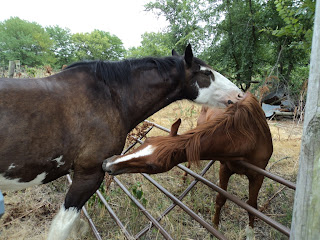 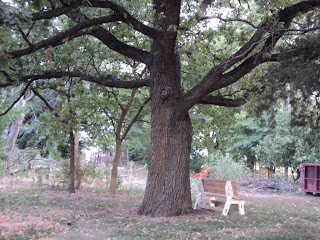 In the shade of this giant oak, I slept though the heat of the day. 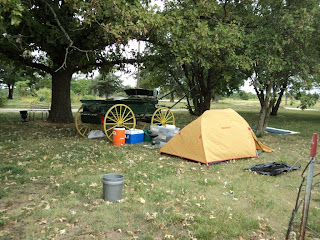 My camp at Diane's 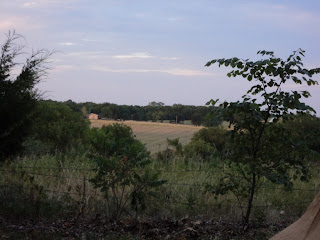 Evening at Diane's, looking out from my camp.


I use my laptop to show Tom and Dean some video footage of my journey, and we put Dean’s son on Reba briefly, but he's very young, and frightened (to put the really young ones on her, there needs to be one who is a little older already up there). That night Diane did not return home as she said she would, but appeared to stay across the road at her son Dean’s house. She had been very kind to me, but also very flaky, like telling me the heat wave had stopped her from keeping her place up, when in fact I realized, after being there awhile - it had been falling apart for years. And her horses, which she claimed to be in tremendous condition like Reba, well, I eventually saw one, and the poor thing was so old, it looked like a concentration camp victim. Tom said the other horse had gotten terribly foundered, which would explain why it didn’t come around. So, taking these things into consideration, I can’t help but wonder if Dean didn’t step in on his mom’s behalf and have her stay at his place that night. Yeah, just protecting mom, can’t fault him for that, even though she was safer with me there than without. In any case, that night a few cars came and shinned their headlights on my camp for awhile before driving away… and that had never happened before.

Posted by James Sheldon at 3:37 PM